Father Hesburgh and Human Rights: His Legacy and our bridge to the future. 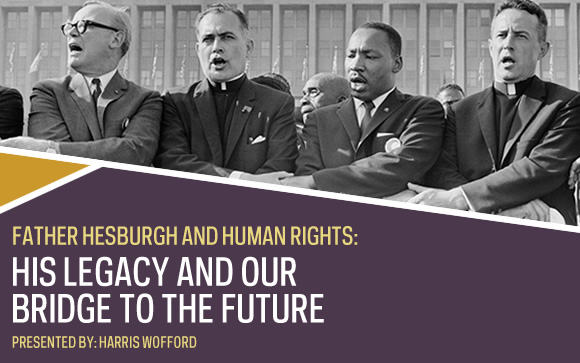 Among a long list of distinguished former titles, Mr. Wofford served as a U.S. Senator from Pennsylvania, Counsel to Rev. Theodore Hesburgh on the first U.S. Commission on Civil Rights, and Associate Professor in the University of Notre Dame Law School. 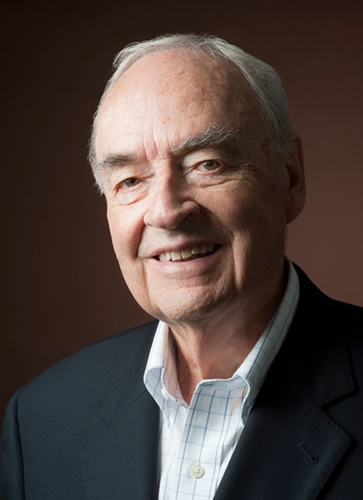 Following his 1948 graduation from the College of the University of Chicago, Wofford and his wife Clare went to India on a 1949 fellowship to study the trail of Mahatma Gandhi. They jointly wrote the book India Afire urging the addition of Gandhian non-violent direct action to the U.S. civil rights movement. In 1950, Wofford entered Howard University Law School and became its first white graduate. He worked closely with Martin Luther King, who joked that Wofford was the only lawyer who helped him go to jail, in civil disobedience, instead of using all the legal arguments to keep him out of jail.

During President Eisenhower's administration, Wofford was counsel to Rev. Theodore Hesburgh (then President of Notre Dame) on the first U.S. Commission on Civil Rights. After a semester teaching at Notre Dame Law School, Wofford played a role in the 1960 presidential election as the Kennedy campaign's coordinator for civil rights. He then served on the White House staff as President Kennedy's Special Assistant for Civil Rights and chair of a new subcabinet group on civil rights.

Also in the 1960s Wofford helped Sargent Shriver plan and launch the Peace Corps. Later Wofford left the White House to serve as the Peace Corps' representative in Africa and director of its large program in Ethiopia where he and his wife and three children lived for two years. He has been recognized as a leading force in the national service movement. He has dedicated much of his life to the goal of making citizen service a common expectation and experience for all Americans.

In the late 1960s Wofford became the founding president of the new College at Old Westbury of the State University of New York, and then for eight years he was president of Bryn Mawr College. In the spring of 1991, after the death of Pennsylvania Senator John Heinz in a tragic air accident, Wofford was appointed to the Senate, pending a special election to be held that November. Wofford won an upset victory, carrying the banner of health insurance for all and also of large-scale national service. While in the Senate, Wofford and Congressman John Lewis initiated and secured passage of the Martin Luther King Day of Service, on King's birthday, which is now carried out in communities across the country.

President Clinton asked Wofford to become the chief executive officer of the Corporation for National and Community Service, to help him save AmeriCorps, the new national service program Wofford had championed in the Senate but which the new House of Representatives had voted to terminate. During the rest of the 1990s AmeriCorps grew from 20,000 to 50,000, and then, with the support of President George Bush, it grew to 75,000. In recent years, Wofford has been chair and then co-chair (with Alma Powell) of the America’s Promise Alliance for children and youth. In 2007 he joined the campaign of Barack Obama as an official surrogate, speaking on his behalf in a number of states and introducing him for two major addresses – on race and on service.

Wofford serves now as the senior advisor to the Franklin Project of the Aspen Institute, launching a new effort to enable all young Americans coming of age to do a year of full-time service. In 2013, he received a Presidential Citizens Medal from President Obama. Wofford has law degrees from both Howard University Law School and Yale Law School. He is author of several books, including Of Kennedys and Kings: Making Sense of the Sixties.