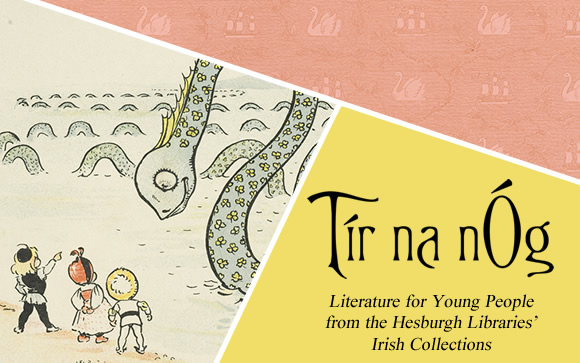 In 2003 the Hesburgh Libraries acquired the Irish Fiction Collection of Rolf and Magda Loeber. The Loebers are the authors of A Guide to Irish Fiction, 1650-1900, a monumental study and annotated bibliography of fiction written by Irish authors, set in Ireland, or related to Ireland. The acquisition of the Loeber Collection of over two thousand books, generously funded by Dr. Michael W. J. Smurfit and Dennis F. and Ellin C. Murphy, marks the launch of the Hesburgh Library's ambitious Irish Fiction Initiative.

Children's literature forms a very interesting subset of this collection. The nineteenth century saw the development of stories with a moral purpose and later a trend towards books designed to delight and amuse children. By the twentieth century a number of genres of youth literature are in evidence including girls' stories, adventure stories and picture books. Nationalism, folklore, the Irish language and the culture and customs of rural Ireland emerge in twentieth century Irish children's literature.

In the late twentieth century, children's books deal with Ireland's history and also problems of Irish society. The Famine, the War of Independence, and the Northern Ireland Conflict form the background of a number of novels from the late 1970s on. Several contemporary Irish authors and illustrators are known throughout the world and this exhibit highlights a few of their works.

Tír na nÓg is the Land of the Youth, a mythical otherworld that features in the Fenian cycle of Irish tales.