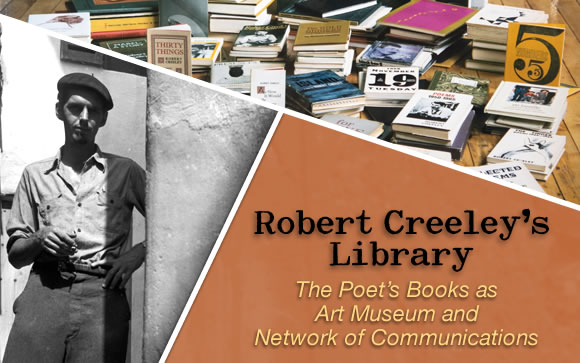 Robert Creeley (1926-2005) was one of the most influential and beloved American poets of the twentieth century. Grouped initially as one of the Black Mountain poets (with Charles Olson, Robert Duncan, Denise Levertov, and Edward Dorn), Creeley brought forward after World War II the legacy of the American modernists, especially William Carlos Williams and Ezra Pound. His spare, vernacular poetry is known for its concision, its rhythmic subtlety (often drawing on the syncopations of jazz), and its linguistic playfulness.

With support from John J. and Terrie Bollman, the Howard and Evangeline Phalin Collection in English and American Literature, and the President's Circle, the Hesburgh Library acquired in 2011 nearly all of the books from Robert Creeley's personal library. This includes his copies of his own books (often in limited or special editions), the beautiful artist books in which he collaborated (many of museum quality), and thousands of books by other writers with whom he associated. As an archive, these books contain many treasures, for Creeley used them as folders to house related materials: letters, photographs, reviews, brochures, notices of poetry readings, and the miscellaneous evidence of travel (plane tickets, hotel receipts, etc.).

This exhibition of select materials from Robert Creeley's library demonstrates the vital and remarkably extensive range of his network of communications and ultimately makes evident his centrality to the literary and visual arts of his time.

This exhibit is curated by Stephen Fredman (Department of English).

The symposium, open to the public, brings together the poet's wife, Penelope Creeley; the publisher of Granary Books, Steve Clay, who assembled the collection; Kaplan Harris, Associate Professor of English, St. Bonaventure University; and a roundtable of Notre Dame graduate students who have cataloged the collection. The symposium celebrates this exhibition and also the publication of The Selected Letters of Robert Creeley, edited by Rod Smith, Peter Baker, and Kaplan Harris (University of California Press, 2014).

The Creeley Symposium will be streamed live starting at 10 am on February 7th.