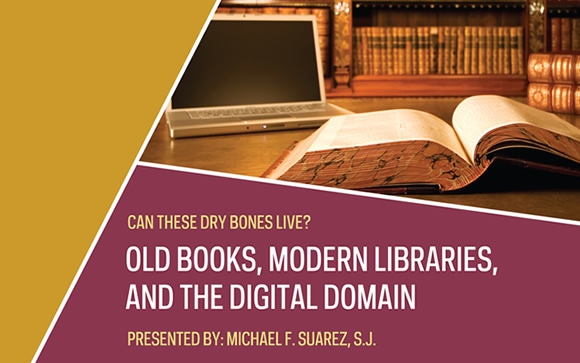 Michael F. Suarez, S.J., is University Professor and Director of Rare Book School at the University of Virginia. The holder of research fellowships from The American Council of Learned Societies, the National Endowment for the Humanities, and the Radcliffe Institute for Advanced Study at Harvard University, he is also Honorary Curator of the University of Virginia's special collections and Professor of English. His most recent book is The Oxford Companion to the Book (2010, co-edited with H. R. Woudhuysen), a million-word reference work on the history of books and manuscripts from the invention of writing to the present day. The Sunday Telegraph in London called it "colossal" and "a paradise for book lovers;" while The Wall Street Journal praised it as "a fount of knowledge where the Internet is but a slot machine."

A Jesuit priest, Michael is currently co-General Editor of The Collected Works of Gerard Manley Hopkins, and Editor-in-Chief of Oxford Scholarly Editions Online (OSEO), one of the largest digital humanities projects extant today. His two forthcoming books (both from OUP, late 2013) are a scholarly edition of The Dublin Notebook of Gerard Manley Hopkins (co-edited with L. J. Higgins) and The Book: A Global History (co-edited with H. R. Woudhuysen). In 2014-15, he will hold the J. R. Lyell Readership in Bibliography at Oxford University.

Can These Dry Bones Live?