Hesburgh Libraries Lecture Series:
The Story Behind "Touchdown Jesus"
Millard Sheets: An Artist's Journey to the Word of Life 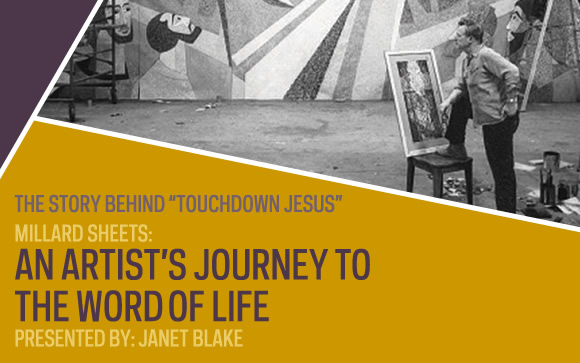 The presentation “Touchdown Jesus” – Millard Sheets: An Artist’s Journey to the Word of Life will provide an in-depth overview of the life and work of this singular American artist of the twentieth century. In 1964, when the Word of Life mural (affectionately known as Touchdown Jesus) was dedicated, Sheets was at the pinnacle of his more than thirty-year career as a painter, muralist, and architectural designer.

In 1953, Sheets had been hired by Los Angeles businessman Howard Ahmanson to design the National American Insurance Company building on Wilshire Boulevard in Los Angeles. It would be the prototype for the many Home Savings and Loan Buildings that Sheets would design for Ahmanson between 1954 and 1975. The design of the buildings incorporated large mosaic murals whose narratives reflected the cultural history of the area in which the building was located. To facilitate the projects, Sheets founded a design studio in Claremont—Millard Sheets Designs—which employed many artists and artisans. The studio completed over one hundred murals and mosaics throughout the United States for both private and business clients

While teaching at Scripps College in Claremont, California, Sheets met noted philosopher and anthropologist Dr. Hartley Burr Alexander. It was Alexander who instilled in Sheets the belief that the purpose of art—music, literature, dance, and visual arts—is “to serve society” as a “language that does something to the human spirit that is irreplaceable.” It was that purpose that informed the work of Millard Sheets throughout his career.

In 1957, he said: “Art is an expression of the love of a man as a human being . . . a special language born out of tremendous need that is universal. The artist’s task now and in the future is to communicate this to mankind.” His love of mankind is reflected in his works. Sheets created beautiful images of the world around us. Through them he wove a tapestry of life, telling a story that does, indeed, “connect people to knowledge.”

This presentation will showcase the artist’s painting career followed by a description of the Word of Life mural and its creation. Immediately following the presentation, participants will have an opportunity to ask questions, and then view the mosaic from the library courtyard.

An Artist's Journey to the Word of Life